SDDOT asks, "How can we deploy traffic control for an event where a town's population grows by 1000% for one week a year?"

Each summer, motorcycle enthusiasts from all over the globe descend upon Sturgis to take part in the world’s largest motorcycle rally. Tens of thousands of people flock to Sturgis, South Dakota for a week full of motorcycle events, parties, concerts, and general recreation. Bikers know the event as simply “Sturgis.” Locals refer to it as “The Rally.” Whatever you call it, it is the time of year when the population of the State of South Dakota nearly doubles. Since 1938, Sturgis has welcomed motorcycle enthusiasts from across the United States and around the world to the annual Motorcycle Rally. Based out of this small community in the northern Black Hills, the Rally officially runs for seven days every August.

Anytime events take place in areas with modest infrastructure, serious concerns are raised about traffic control and road safety. Most intersections in and around Sturgis do not have traffic signals. Word spreads about great parties and Sturgis is no exception, in the early 2000s, as the popularity of The Rally began to swell, and so did the traffic jams. Local officials tried various methods of traffic control in an effort to deal with the growing traffic congestion caused by the event.

Their first solution involved adding stop signs to manage the heavy flows. This ultimately led to horrible backups and gridlocks. The next year, human flaggers were introduced. Flaggers were required around-the-clock not only for the duration of the event but in the days leading up to the start of the rally and for days following the rally. This became very expensive for the state and very dangerous for the flaggers. Even though traffic congestion improved, South Dakota DOT knew they could do better. 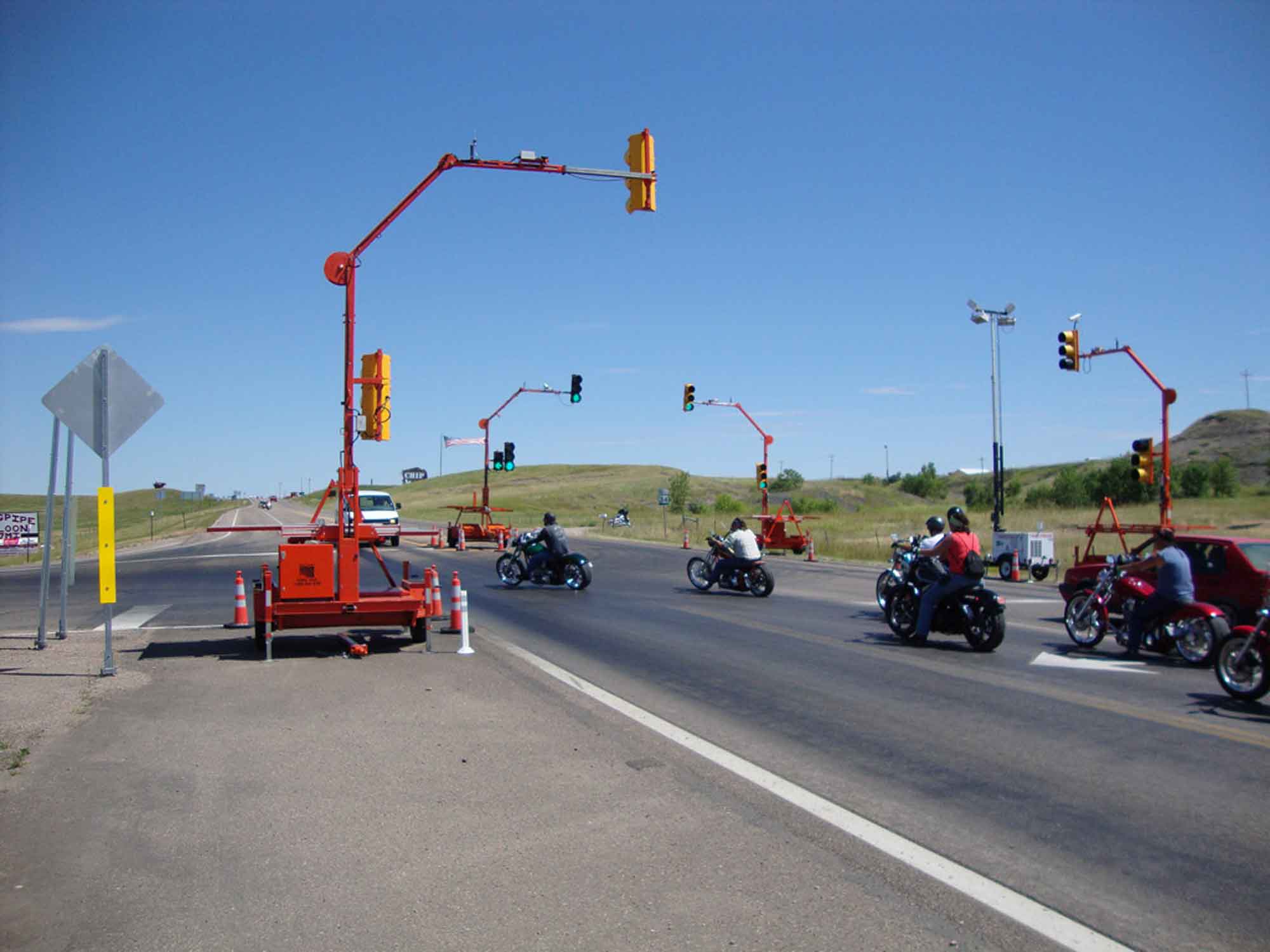 SDDOT decided it was time for a comprehensive traffic control plan. They partnered with Horizon Signal Technologies and installed temporary Portable Traffic Signals at a high-traffic intersection to efficiently manage the heavy volumes of vehicles.

The experiment was a breakthrough success. In each subsequent year since the initial trial, Horizon Signal has supplied an increasing number of portable traffic signals for the rally.  As the event has continued to grow, so too have the traffic control demands. In recent years, upwards of twenty-five PTSs have been used for the event across seven intersections in and around Sturgis.

I was thrilled with the results. ”Before signals were introduced we would use flaggers at various intersections during the day. People would drive down the wrong side of the road because of poor direction and visibility.

The SQ3TS Portable Traffic Signal System combines fast efficient setup with highly reliable performance. The multitude of modular add-on components makes the SQ3TS the most versatile portable traffic signal system available today. The SQ3TS is the smart choice for a wide variety of short and long term traffic control applications. From a simple one lane bridge repair project to complete intersection control the SQ3TS has the attributes to provide safe efficient traffic control.